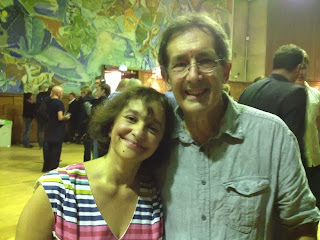 There I was, at the Blowzabella do the other night, pretty much minding my own business, soaking up the music and sipping down the London Pride, when I was accosted by this woman asking "are you Michael"?

Well I couldn't really deny it, especially when she said "surname Shade?", and I'm glad I didn't because it turned out to be my distant cousin Mira. We had never met, though we did have a brief email exchange a few months ago, during which we realised we would both be going to the BZB do last Saturday.

She's my great-grandmother's brother's second wife's great-grand-daughter - is there a word for that? She'd been googling for her grandmother, Mary Levin, and came across a photo I'd put up on Flickr a couple of years ago from a Walk I did around some of our Levin places in the East End: I'd tagged the photo with some of the family names, and Google spotted them.

It turns out she and her husband are keen on French traditional music, and he plays the hurdy-gurdy. The world, as they say in Spain, is a handkerchief.

My Other Family Story Sites

Belaroots
Account of visit to Belarus May 2011
Belaroots Stories
Stories and histories around my Ilyutovich, Levin and Shreibman families
Poyln Roots
Tracing my Frankenstein and Waksman families from Poland to London and around the world.